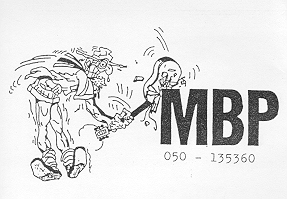 Meaning bandname: Original abbreviation for Maximum Break Party. Intended to mean Maximum Demolition,- or Break Up Part. Later they abolished the abbreviation to avoid confusion with hiphop and funpunk and called themselves MBP.

History: MBP was formed in 1984 by Jules, Vincent, Michael and Onno. Vincent used to play guitar in the Zwolle-based band "Blik?", and his brother Michael used to play guitar there in the band "RIP". With their rhythm box, called Thomas, two shows were done, before Henry joined on drums. This caused them to be kicked out of two rehearsal places because of too much noise. After the first gig, DJ Thermo arranged them to play Vera as support to the legendary Anti-Sect. Their style changed gradually from Flipper like slowcore to Dead Kennedies/Hüsker Dü like fastcore. Many shows followed, most with their bloodbrothers Ampachen (in which Onno played drums). It all ended with a 'goodbye' tour to Spain/Bask Country, and one final concert back in Groningen at the Rhythm Pigs benefit (to help the poor suckers buy tickets home after many serious tour problems). MBP released one tape (split cassette with Ampachen) in March 1986. The songs were recorded in the rehearsal room and live in De Oosterpoort, Groningen, approx. 30 minutes in total. Bandmember Onno released three tapes under the name "Who Cares" (which was regularly reviewed as being a 'great band', whereas he played everything himself - MRR said 'this is a great reminder of what punk is all about). Later, he made a jazz-fushion solo LP under his own name, Onno Ottevanger. 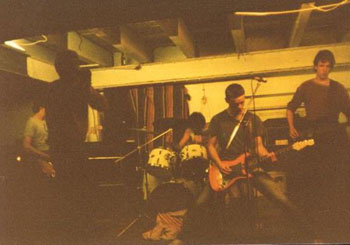