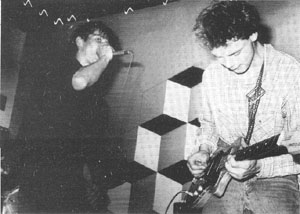 Meaning bandname: non-existent word invented by Onno. Intended to give no notion so you have to listen to get a clue.

History: Started in 1985. Vocalist Marcel came from Garbitch (Wipers-style trio existed in 84/85). Rinze and Erik came from some sort of punkcoverband called De Sade And His Dancing Dildo’s. Marcel’s brother Onno made as Who Cares three solo tapes (1986-88) and released in 1989 a LP. Many shows followed, most with their bloodbrothers M.B.P. (in which Onno played guitar). The last drunken concert of Ampachen was done in Alkmaar where Marcel was regulary falling over the drumkit during the launch of a new song.

Description: hardrockpunk with solo’s; have also been compared to The Instigators. 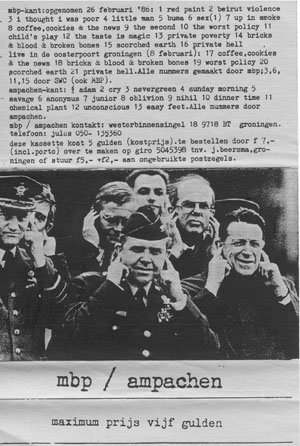